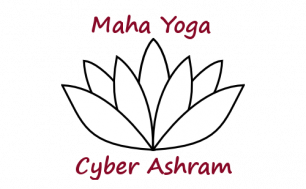 Free Instruction And Initiation In Maha Yoga, The Science Of Self-Realization.
Update 2015: This site is no longer being regularly monitored. It remains active for informational purposes only.

"The self is the absolute". Maha Yoga is the science of Self-Realization which has been past down through the ages from teacher (Guru) to student (Shishya) as the most direct path to spiritual advancement. Maha Yoga is not a religion or a dogma, it is instead a natural method for the elevation of consciousness. To borrow an analogy from the spiritual teacher, Osho, it is a kind of spiritual alchemy, an art of inner-transformation. It is your birthright to realize your divine nature and Maha Yoga is the simplest and most direct path to that goal. Through this cyber-ashram we offer absolutely free shaktipat initiation and instruction in Maha Yoga.

Maha Yoga teaches a direct and personal experience with existance. The core practice is surrender of ego to allow truth to reveal itself. The practice of Maha Yoga involves simply sitting in silent meditation without action and being witness to what arises through the action of Kundalini shakti. Maha Yoga does not teach complicated visualizations, yoga postures (asana), or breathing techniques and is suitable for seekers at all levels of fitness or intellect.

Maha Yoga does not discriminate based on age, gender, race, religion, nationality, or any other descriptive term. There is no fee for this teaching. It is offered as seva (service) to humanity. The miracle of this path is that no matter where you are on your spiritual journey, how much of a sinner you feel you may be, or what flaws you may feel you have, Maha Yoga brings about inner change and is self-guiding towards the goal of spiritual awakening.

What Exactly Does Maha Yoga Involve?

Maha Yoga is also known as Siddha Yoga, Kundalini Yoga, Shaktipat Yoga, and countless other names. The process of expanding consciousness through the surrender of ego exists in most every culture on Earth by various names but is often considered to be best documented by the ancient sages of India. It is the simplest and most direct path to self-realization as no direct effort is required.

At the core of Maha Yoga teaching is the concept of Kundalini. This is the seed of God-hood that exists within you. This spiritual force is identical to the active form of God and exists in every human being. We often hear that it is like a serpent coiled at the base of the spine waiting to be awakened. When the Kundalini is "awakened" it pursues a natural path through the body, all the way burning away negative conditioning, balancing the body, and preparing the individual for the realization of divinity. The destination of Kundalini in this analogy is above the crown of the head. This destination point is considered to be the realm of ultimate consciousness, the eternal form of God that is the absolute. When the journey is complete the individual (atma) is united with the absolute (Brahman) and realization can occur. This analogy of the serpent's journey is the progression of Maha Yoga. Consciousness works within you to reshape your understanding, tear away the ego-self, and allow you to see past the veil of illusion that is the physical world and societal conditioning.

The practice of Maha Yoga is initiated through shaktipat diksha (initiation). Shaktipat is known as the "descent of grace" and generally occurs in the presence of self-realized consciousness. It has been defined by some as the transmission of the "spark" of realization to the seeker like one candle already aflame touching another. Shaktipat can occur through glance, touch, thought, or sound (mantra) and is not bound by time or space as it exists as pure consciousness. Through the Cyber Ashram shaktipat diksha usually takes the form of mantra, a phrase from the Sanskrit language which is empowered to initiate the seeker into Maha Yoga meditation (sadhana). Diksha is given via telephone or skype when possible.

Once initiation has occurred the seeker is required only to sit for meditation (sadhana) for at least one hour per day. A very simple meditation is taught in which all effort is suspended and Kundalini shakti is allowed to arise. When Kundalini shakti is active the seeker may experience automatic movements (kriyas) which take the form of yoga postures (asana), hand gestures (mudra), vocalization (mantras), or they may experience various physical sensations or sensory phenomena such as lights or sounds. These experiences are a natural manifestation of consciousness turning inward and working to dissolve ego and attachment. There is no formal training in any yogic postures or mantras, etc. There is nothing to memorize or master. The entire process is guided by the innate consciousness we refer to as Kundalini. Kundalini will manifest what the seeker needs.

The teachings shared in this website derive from the Tirth lineage of Siddhas (realized beings) which comes out of India. Where possible efforts have been made to limit Sanskrit terminology and provide instruction in simple, accessible English. The practices of the Cyber Ashram retain their traditional basis while offering an updated, western approach suitable for those who do not have a background in Sanskrit, yoga, or Advaita Vedanta.

If you would like to know more about this journey please click on the "Initiation" tab at the top of the page. From this page you can find details about shaktipat diksha (initiation) and Maha Yoga instruction. There is also a wealth of information located on the "Satsang" page in the form of responses to the questions of seekers in text and Youtube video. All questions will be answered personally. This is a one-being show so-to-speak. Peace be with you (Om Shanti Shanti Shanti).